Know, what is the government’s scheme and how it will benefit

Numerous beneficial schemes are implemented by the government to benefit farmers as well as other individuals. The benefits of subsidies are offered to the beneficiaries of this scheme.

In this way, the government also launched a program for unemployed young people. The scheme’s name is Svanidhi Yojana.

In this scheme, loans are provided to street vendors at a nominal interest. Youth are now being involved in this scheme.

This initiative is being implemented by the UP government. In this program, a grant of 10,000 rupees is given to youths in UP. 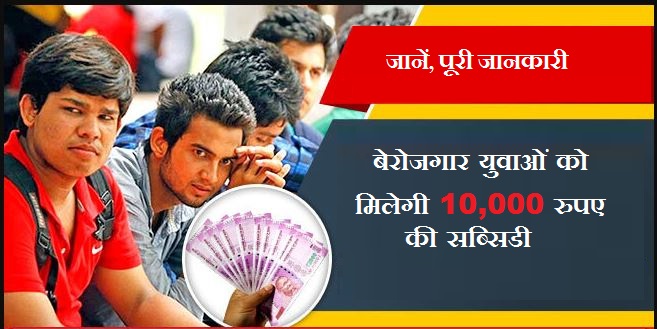 Who can take advantage of this scheme

In this scheme, young people who are unemployed and poor street vendors, laborers, and landless farmers will also benefit.

In this scheme, unemployed young people are granted a loan of Rs 10,000 for the establishment of the business of their choice.

Youth who are unemployed along with shopkeepers and others can profit from the Swanidhi scheme run by the Government of India.

How to get the benefit of the scheme

The initiative was adopted by the UP government to link the youth who are unemployed to an opportunity to participate in the Swanidhi program.

In this scheme, loans are made available to young people who are not employed and subsidies will be given to the.

With this program, the young will be motivated to seek self-employment. In this way, he will be able open a job for himself and also be able to provide jobs to those who are interested in it.

4377 people got subsidized loan under the scheme

It is reported that the UP government has given loans to 4377 people in the scheme. While other youngsters are appealing to be part of the scheme.

According to reports in the media the current number of applications has been approved as part of this scheme, while 4377 have received loans.

In the meantime approximately 1210 forms were rejected, and 298 applications are in limbo. The local administration and government may once more check the rejected applications before beginning the process of approval.

Who can apply in Svanidhi Yojana

In the Svanidhi scheme, anyone working in the country that performs a small number of tasks, like a vendor of vegetables, fruit sellers or ready-to-eat street foods, barbershop panwari, cobbler tea stalls, bread vendors, etc. sellers of pakoras and eggs selling stationery and books or craftsmen, and so on. could be eligible for the scheme.

Institutions providing loans under the scheme

In this program, a loan amount of $10,000 will be given to individuals selling their goods on the streets.

The time for repayment of this loan was set for one year, and should a person pay back the loan within a year, the subsidy of up to 7 percent of the interest can be transferred into his bank account through the federal government.

Eligibility and required documents for applying in the scheme

To apply for Pradhan Mantri Swinidhi Yojana, you’ll need certain documents that are listed below the following documents are required

how to apply online in svanidhi yojana

An online application needs to be submitted for Svanidhi Yojana. However, before making an application, applicants must be registered with the local authority as a shopkeeper on footpaths.

The form of this scheme is available on the official website of this scheme https://pmsvanidhi.mohua.gov.in/. Additionally, for those who wish to avail the scheme, an application must be made at any bank of the government.

You can find the application forms for this scheme at every government bank. You can download the form from this page and fill it in.

Additionally, you need to provide a picture from your ID card. Once the application has been approved the first month’s installment will be added to your bank account.

To encourage the use of electronic payments, which includes cash-back to street vendors the Government has increased its budget for this scheme.

The government has stated its hope that approximately 1.2 million residents of urban areas will benefit from this program.

Through this program, 31.9 lakh loans have been approved until April 25, 2022. Additionally, 2,931 crores were refunded to repay 29.6 thousand loans. 51 crore was released as an interest subsidy.