What is the state government’s diesel subsidy scheme? and how farmers will get benefit from it?

Monsoon season has begun. This time, however, the monsoon is only active in certain states. In some states, the monsoon’s activation has not been seen yet.

In this scenario, due to the absence of rainfall in the states, it is evident that the sowing rate of Kharif is declining.

Up to now, even 50% of Kharif sowing is not carried out in these areas. At present, the state that comprises Bihar along with Uttar Pradesh is facing drought conditions.

In this scenario such a situation, in this situation, the Bihar government has decided to provide diesel subsidies to farmers for the benefit of farmers.

This will allow farmers in irrigating their crops, and will also lower the cost of cultivating. We are providing details about the diesel subsidy program within Bihar to ensure that farmers in the state can benefit from it. 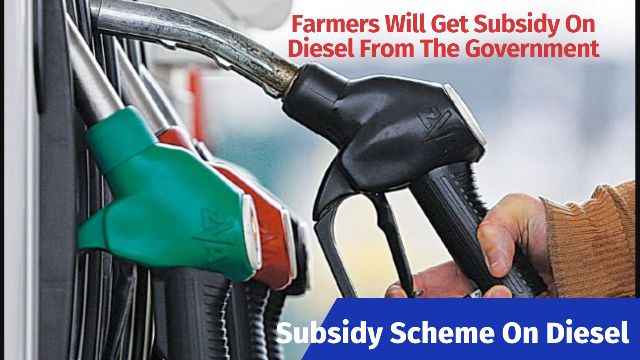 Sowing of these crops is being affected in Bihar

According to reports in the media the sowing of paddy and jute as well as other Kharif crops is directly affected by the absence of monsoon rains in Bihar.

The state of Bihar. Due to the drought in Bihar State farmers are unable to plant their crops on the one hand but on the other side, they are unable to provide water to the sown crops.

Meeting to deal with irregular monsoon and drought situation

Bihar Agriculture Minister Amarendra Pratap Singh held a review meeting to discuss the possibility of drought in the event of an unpredictable monsoon condition in Bihar.

The minister was informed at the meeting that up to June 11, 2022, Bihar has experienced an average of 33 percent less rainfall than usual which has led to the situation of drought in Bihar.

To save farmers from the plight of drought, the minister discussed offering electricity to farmers with no interruptions and also providing a 100% subsidy to farmers for diesel to use for irrigation as well as seeds for other alternatives to crops.

How much subsidy will farmers get on diesel

To enable farmers in the state to water their crops in case of drought to ensure that their crops are adequately irrigated, it is the Bihar administration has decided to offer subsidies on the purchase of diesel.

In this regard the reason, it was approved by the Bihar government to provide a subsidy for diesel based on the cultivation of the crops.

In this regard, the government has decided on how much subsidy for diesel crop-wise. It is as follows:

To qualify for diesel subsidy farmers need to adhere to certain conditions and terms, which are:

This should be the eligibility to get subsidy on diesel

What documents will be required to get subsidy on diesel

Farmers must apply for subsidies on diesel. To do this, they’ll need to submit several documents, that are listed below:

Where to apply for diesel subsidy / subsidy in Bihar

The farmers of Bihar state who are eligible for a subsidy on diesel will have to apply online by visiting its official website https://dbtagriculture.bihar.gov.in/.

We inform you that, at the moment, the decision was taken by Bihar’s Bihar government. Applications are scheduled to be received to apply for this scheme shortly.

To learn more about the program, farmers should contact the nearest department of agriculture within their district.

Additionally, Bihar farmers can also learn more about the scheme through the call center at 1800-180-1551.