Learn about how electricity is generated by tractor

Many are affected by power interruptions in the summer months. Because of this, power is interrupted throughout the villages more than in the city.

In many villages, there is an interruption of between 6 and 10 hours. In this situation, farmers are faced with problems during irrigation.

Now, the farmer can easily water the crops in his fields using this electricity. We’re talking about Ganesh Patidar farmer of village Pathrad in the Khargone district in Madhya Pradesh. 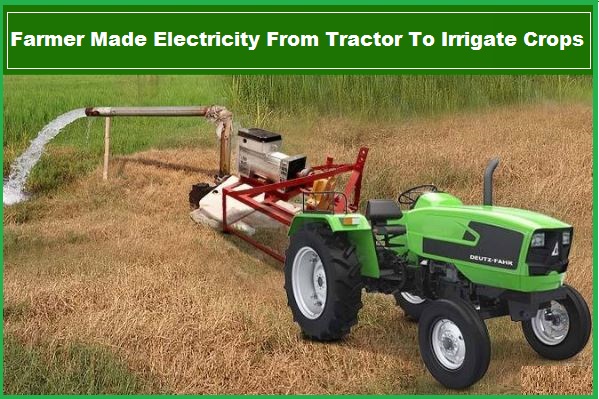 The concept was born out of witnessing the difficulties of farmers during summer.

This summer, Niwad farmers are experiencing power shortages in the present. The villages are provided with electricity for 10 hours The electricity is supplied from 4-8 in the morning, and from 3.30 in the afternoon until 9 in the evening.

This means that the time for irrigation of farmers is interrupted because of the power supply.

In such a scenario and recognizing the issues of the farmers Ganesh Patidar, a farmer from Pathrad village in the Khargone district initiated an initiative in the area of power generators using a tractor to eliminate the power issue which is still a topic of discussion within the entire village.

How to get electricity from tractor

Farmer Ganesh Patidar is using an old armature that is kept at his home to produce electricity from his tractor.

It is attached to the tractor and then driven. It generates 440 volts of electricity. This electricity is used to irrigate this Kharif maize cotton crop over 15 acres of the field.

2 and 1/2 liters per hour of diesel is used to produce electricity using the tractor. Electricity can be produced through the continuous operation of the tractor over 10 hours.

Plowing through the field the help of a bicycle

Pannalal Mahto farmer from Dungri village located above Jharia within Dhanbad in Jharkhand has designed an ox-cart made of Jugaad that can easily plow the field.

Pannalal Mahto, a farmer who has matriculation passes however, after completing this cycle, he’s getting praise all over the village.

Two horses’ power motor pump is installed on this bicycle. The rear portion of the bicycle was removed and the motor has been installed into it.

Two tasks can be completed by the bicycle One of which is plowing the field, and irrigation could also be accomplished by drawing water from a tubewell or a well.

Pannalal was required to invest only 10 thousand rupees for this cycle. After removing the rear wheel from the bike three pads (iron plowing machines to plow the field) are installed inside the. Kerosene is required to operate this jugaad-type cycle.

If the kerosene is exhausted then the field will be cleared even when pressing the bike. A 2-horsepower motor has been fitted to this cycle. Pannalal was assisted through Tata Steel for this invention.

Mini tractor made from motorcycle

The design of the mini tractor was made by combining the parts of an old motorbike including a water pump, scooter and. The farmer has been working using this mini tractor for nine years ago.

It cost only 5000 dollars used to build the mini-tractor. This means that the cost has been reduced to five times the cost i.e. 70-80 Rs.

We would like to inform you we know that Kisan Dev Manjan has studied up to the 10th standard. He also does farm work.